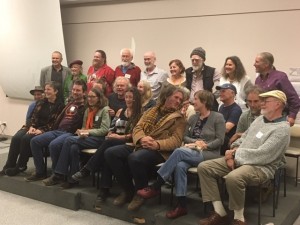 Elders and Community Service Award recipients at APC in 2018

Elders are those individuals who have made a significant contribution to the permaculture community. This is not restricted to service in Australia and/or New Zealand, and includes any overseas work and projects. However nominees must be Australian or New Zealand citizens, be at least 55 years old and/or at have achieved at least 25 years of active permaculture involvement. Nominees who are deceased can also be considered, so that their contribution can be recognised and acknowledged.

Permaculture Community Service Awards recognise those individuals who do not meet the criteria for Elder, but have made significant contributions to the permaculture community over at least ten years. Examples of their contributions may be on-ground projects both in Australia/New Zealand and/or overseas, continual service in developing and maintaining a community garden, an educational program in a school involving permaculture teaching, garden design and maintenance of the gardens, noteworthy involvement in developing a transition initiative or similar, or outstanding involvement in community-based organisations.

Lists of previous recipients of both Awards are available HERE